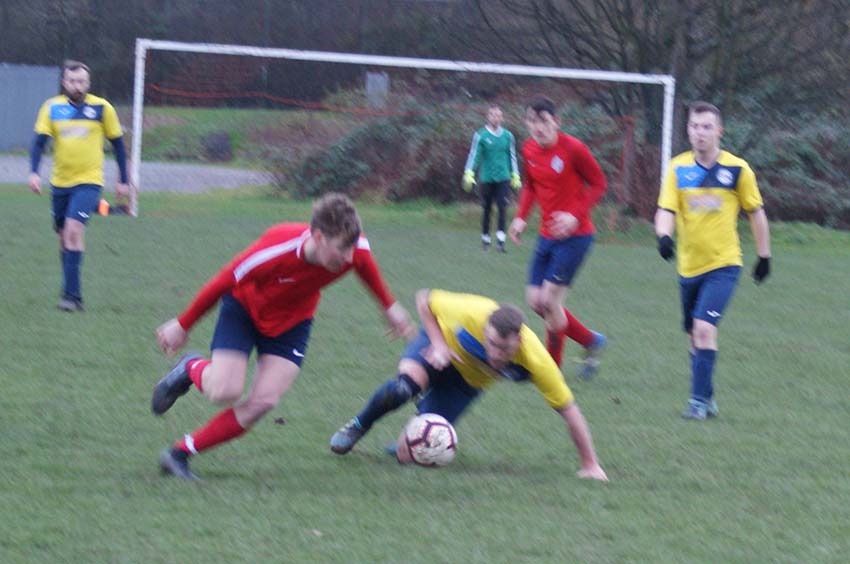 They pulled off one of the giant-killing wins of the year recently in the Rhodes Cup beating Premier Division high-flyers Waterloo to reach the quarter finals where they will visit another top Premier team in Salford Vics.

They made it two quarter-finals to enjoy after another thriller with fellow Division Three side Stoconians seconds which went to a penalty shoot out.

The teams shared six goals in an end-to-end nerve jangler but Village ultimately kept their cool with a 4-1 shoot-out win to earn a home tie against Rochdalians’ seconds in the last eight.

In the Premier Division long-time leaders Rochdalians took advantage of Whalley Range being without a game to go back on top with a narrow 2-1 win at in-form Mellor.

Rochdalians are now a point clear of Range with two games in hand to keep the title contest in their own hands.

Salford Vics are in third place after beating Trafford United 3-2 in an extremely entertaining encounter.

In the first half Vics twice took the lead and twice Trafford came back to equalise.

Vics made it 3-2 half way through the second half and despite chances at both ends, there were no further goals.

Dale McAndrew was the star for Vics, netting a brace, while Ben Green took advantage of the wind to score directly from a corner to complete the scoring for the victors.

South Manchester stay in the top flight after another entertaining game at Milton where they won 4-3 courtesy of goals from Cassius Murray, Paul Sunderland and Keifer Greig.

Elsewhere, High Lane had to work hard for a narrow 2-1 win over Old Ashtonians and Abacus Media kept Old Stretfordians in the relegation scrap with a 3-1 victory which took them above Strets.

The game of the day in Division One saw Parrs Wood Celtic keep up their chase of leaders Dom Doyle with an efficient 2-0 win over fellow promotion hunters Irlam Tigers.

The leaders kept up their unbeaten record with a 4-2 win over a hard-working Moston Brook and Chorltonians moved into third spot as Aaron Rodger, Dan Slack and Jonathan Marshall struck for a 3-2 win at Hooley Bridge Celtic.

At the other end of the table Oldham Vics emerged as the breathless winners by 6-5 over Stoconians and there were wins for Bury Ams by 3-0 at Didsbury and Swinton by 3-2 at AFC Oldham.

Manchester Polonia stay on top after a 2-1 win at Bedians.

Lukasz Ziabkao gave Polonia the lead before Bedians drew level through Dom Breed, but Polonia had the last word with the winner.

Newton were held to a 1-1 draw at South Manchester seconds and were made to rue several missed chances as a thunderbolt from Anthony Glover gave South the lead.

Newton hit back two minutes later with a fine header from Matty Harrop with neither side then able to add to their tally.

Whalley Range seconds are hot on the heels of the top two win a clinical 3-0 derby win over Chorltonians seconds coming via strikes from Dylan Malone (two) and Ash Green.

Urmston Town are in fourth place after being held to a 1-1 draw at Mellor seconds and Hollingworth are also in touch after a 4-2 win over Santos.

Jack Tilgan gave Hollingworth the lead on 23 minutes but Santos drew level on 48 minutes with a spot kick from Jonny Harrison.

Hollingworth then took control as George Woods, Jonny Pariguax and Phil Whiteman netted with Harrison adding a late and deserving consolation for Santos.

The other game in the division ended in honours even with Rochdalians seconds and Spurley Hey sharing two goals.

Dukinfield Athletic stay firmly in control of Division Three as a 5-2 win over Chadderton Park extended their lead to eight points over Stoconians seconds who were in cup action.

But Radclyffe continue to haunt Dukinfield as a 6-0 win over Heaton Mersey has them ten points behind but with five games in hand over the leaders.

There was an upset in Division A as Unicorn Athletic’s good start to 2019 carried on with a battling win at top of the table Elton Lib Hargreaves.

Two early goals from James Newton and Ben McKie gave the young Unicorn team some confidence and they played some great football on a sticky pitch.

Elton grabbed a penalty lifeline just before the break and started the second half on the front foot before a great team goal was tucked away for Ben McKie’s second.

A great header reduced the arrears and Unicorn had to defend valiantly but managed to hang on for the three points and inflict the first league defeat of the season on their opponents.

Trafford United seconds enjoyed a 4-2 win over Dukinfield Athletic seconds in a sporting contest, Moston Brook seconds were 3-0 winners at Spurley Hey seconds and Flixton scored the only goal of their game against Chorltonians Villa.

The other game in the division was a 1-1 deadlock between Signol Athletic seconds and AFC Oldham seconds.

In Division B, AFC Stockport took advantage of title rivals Chadderton Cott seconds being in cup action as they cruised to a 7-1 win over Hooley Bridge Celtic as their title rival Old Stretfordians seconds and Parrs Wood Celtic seconds both lost to go three points clear at the top of the table.

Celtic were beaten 2-1 by AFC Oldham seconds and Strets lost to the only goal of their game at Bury Ams seconds.

Hillgate kept up their recent good run with a 5-2 win over Staly Lions and Chorltonians Athletic had Anthony Hardy and Nathan Henry netting in a tight 2-1 win over Didsbury and another close contest ended in a 3-2 win for Moston Brook thirds over Stoconians thirds.

Deans continued their remorseless progress to the Division C title with a big 8-0 win at Whalley Range thirds.

All credit to Range for a battling second half after being 6-0 down at the break to restrict Deans to two second half goals.

Deans are now nine points clear of Old Strets thirds who lost 2-1 at Irlam Tigers seconds and Chadderton Park seconds closed on Strets with a 4-2 win over Hollingworth seconds.

A thriller at Chorltonians Albion was decided by a last-minute strike from Oscar Lynch to give them a 3-2 win over Govan Athletic and also on target for Albion were Conor Carlin and Saad Abdullah.

Stoconians fourths were celebrating hard and long with a 4-2 win at Moston Brook fourths keeping them level on points with Albion at the foot of the table.