THE league were delighted to return to competitive action in bright sunshine following snow and heavy rain on the previous day which threatened to cause mass postponements.

Mellor had a perfect record going into the match and soon settled their nerves with a 20-yard volley from Jack Stringer, quickly followed by a cool penalty from the ageless Dave Whelan taking them to an early 2-0 lead.

It was even-steven for the rest of the first half but the young, pacy Mellor attack always looked dangerous with the Rochdalians keeper making some outstanding saves.

Mellor took control after the break as they doubled their lead with a free-kick from Cameron Coup and a penalty converted by Joe Dalby.

Jack Stringer added his second and Louis Isaacs made it 6-0 before Rochdalians bagged a late consolation. 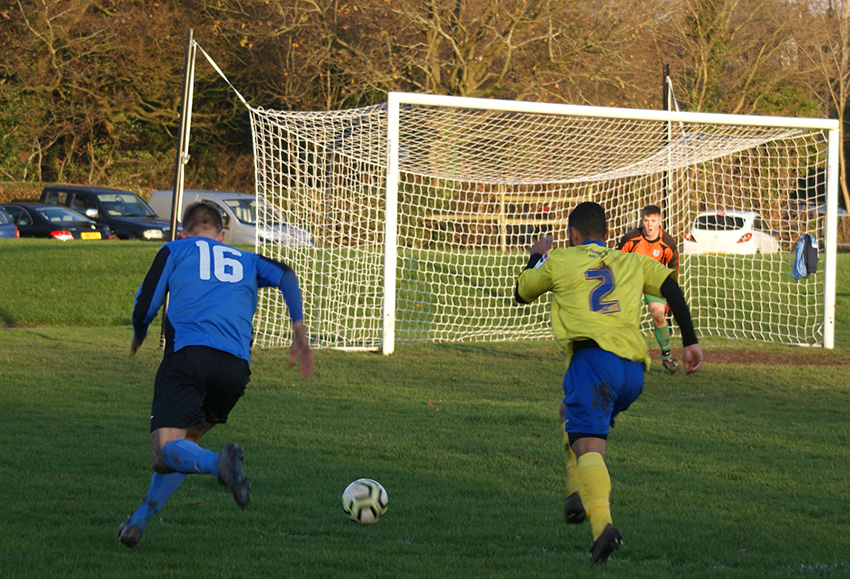 The victory took Mellor four points clear at the top with a game in hand as second-placed Salford Vics lost out 4-2 at Irlam Tigers and AFC Oldham moved into third spot with a 3-1 derby win at Radclyffe..

The other games in the division saw Dom Doyle beat South Manchester 3-1 to move level with them in mid-table and there was a welcome second win of the season for Manchester Polonia at Milton.

It’s much closer at the top of Division One with three teams locked on 13 points and De La Salle Reds are the new leaders after winning a tight game with Moston Brook as they scored to only goal of an occasionally feisty game well controlled by referee John Melia to draw level with non-playing Stretford Paddock.

Bury Ams missed a chance to join the top three as they were held by Didsbury in an entertaining 4-4 deadlock.

The closeness in the division was reflected in the other two games with Urmston Town winning 3-2 at Dukinfield Athletic while Trafford United and Signol Athletic shared four goals.

Old Stretfordians and Signol JFC are flying high at the top of Division Two with Signol posting a big 8-2 demolition of South Manchester seconds to stay a point behind Strets who were also impressive in a 5-2 victory over Chadderton Cott.

Bedians looked good in a 4-2 win over Shaw Athletic and the other games saw Oldham Vics beat Mellor reserves 1-0 while Santos recorded their first win of the season by defeating Salford Vics reserves 3-1.

Division Three is providing a thrilling spectacle, with three teams locked on 15 points led by Sale Amateurs who were out of league action winning their Altrincham FA cup match against their own second team by 4-1 to gain club bragging rights.

Hattersley joined them and non-playing Aldemere at the top after edging Elton Lib Hargreaves 3-2.

Viilage Manchester are poised behind the top three after a good team performance saw them beat Woodhouses by 3-0.

A great team goal was finished superbly by George Mourdoukoutas put Village ahead at the break and Matt Hodgson doubled the lead on 55 minutes before a late strike added gloss to the scoreline.

Wythenshawe Wanderers are also well placed after a 3-1 win over Abacus Media reserves.

Hooley Bridge Celtic were able to celebrate their second win of the season by 2-1 at Didsbury reserves and Stretford Paddock reserves were in seventh heaven with a resounding 7-2 win at Stoconians reserves.

There was nothing to separate the top two in Division A as AFC Stockport and Kartel drew 1-1 to stay level on 14 points and move four points clear as Moston Brook reserves were beaten 3-1 by Mellor thirds.

AFC Oldham reserves drew level with Brook after winning 2-1 in a close encounter with Parrs Wood Celtic and the tight nature of the division was reflected in a 2-2 draw between Chadderton Park and Trafford United reserves.

Aldermere reserves saw their big lead at the top of Division B reduced to four points  as they were beaten 3-2 by Irlam Tiger Rangers, which gave local rivals Flixton JFC to close the gap and they duly did with a routine 2-0 victory over Chadderton Cott reserves.

Also in the chasing pack are Salford Albion, who recorded a 6-0 win over Bury Ams reserves, and Moston Brook thirds who beat Spurley by the odd goal in three.

Heaton Mersey won their local derby by 4-2 over Hillgate and the other game in the division saw AFC Oldham thirds and Dukinfield Athletic reserves share four goals.

Just a point separates the top three in Division C with AFC Stockport Warriors moving into top spot on goal difference from non-playing Salford Storm reserves after a convincing 6-1 win at Oldham Vics reserves and a confident 4-0 victory by Bury Ams thirds at Govan Athletic keeps them a point behind the top two.

There was also a six-hit for Stoconians thirds over Staly Lions and Altrincham Hale shared two goals with Didsbury thirds.

Irlam Tigers A team made it a great day for the club as a 4-2 win over Deans reserves keeps them a point clear at the top of Division D from Urmston Town Vale who had to work hard for a 3-2 win over Whalley Range reserves.

Spurley Hey’s new reserve team were the top scorers in the league on the day with a 9-1 thumping of Chadderton Park reserves and also in the goals were Moston Brook fourths who hammered Stoconians fourths 5-2.

Greater Manchester Football Club suffered their first defeat of the season – a 4-1 loss at the hands of Shaw Athletic reserves who were boosted by an early strike from Owen Shaughnessy.