League and club officials put in a great stint of hard work and sensible initiatives to keep most of the league programme in operation despite some awful weather in the week before and growing Covid restrictions.

Results this weekend have made it extremely tight at the top of the second and third divisions.

Mellor maintained their perfect record as they posted their fifth league win of the season by 4-2 at Lancashire Amateur Cup finalists Milton to keep clear at the top of the Premier Division.

Salford Vics stay a point behind Mellor, who have played a game less, with a hard-earned 3-2 win at Dom Doyle.

Abacus Media keep on the heels of the top two after a resounding 7-0 win at Manchester Polonia and the mid-table game at Radclyffe had the home team winning 5-3 against Irlam Tigers.

The unpredictable nature of Division One was underlined after leaders Moston Brook were defeated 2-1 at home to Bury Ams, which means the top five are separated by three points.

Stretford Paddock took full advantage of that slip-up by edging a seven-goal thriller at Urmston Town to go level on points with Moston Brook at the summit.

North Walkden showed their title intent with a convincing 5-0 win over Signol OB and they are four points adrift of the top two with three games in hand.

The local derby at Dukinfield Athletic saw the home team secure their second point of the season in a 2-2 draw with Newton.

Division Two looks even more competitive, with just a point between the top four teams.

Long-time leaders Old Stretfordians were held 1-1 at Salford Vics reserves and with Shaw Athletic and Chadderton Cott not in action, Signol Athletic JFC drew level with them after an emphatic 6-1 over Rochdalians reserves.

The game of the day was at Oldham Vics in their local derby with Santos that saw an amazing 15 goals in the back of the net with Vics managing one more than Santos.

There was also an entertaining encounter at Bedians where the home team and Mellor reserves enjoyed an immaculate playing surface.

There as a strong end-to-end wind and Bedians took advantage to lead 1-0 at the break with a clinical strike from Abdi Rashid. 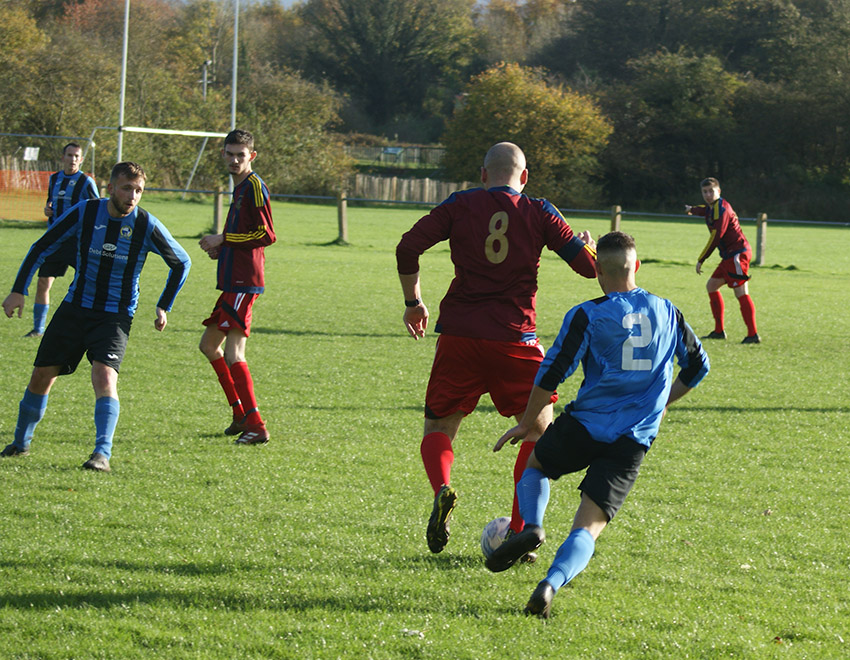 Then it was Mellor’s turn to use the wind to good effect as they quickly drew level with goals from George Mitchell and Graham Stringer that spurred them onto a 4-2 victory.

Trafford rivals Sale Amateurs and Aldermere are locked on 15 points at the top of Division Three and they both had comfortable victories with Sale winning 4-2 at Abacus Media reserves and Aldermere inflicted the first defeat of the season on Hattersley by 5-2.

Wythenshawe Wanderers are also on a good run of form as they kept a clean sheet in a 4-0 win over Stretford Paddock reserves.

The other game in the division saw Woodhouses enjoy their second victory of the season by 3-1 at Elton Lib Hargreaves.

AFC Stockport’s game was postponed, and in their absence, Kartel Sports took three points by edging high-flying Moston Brook reserves 2-1 to move top of Division A with a game in hand too.

Chadderton Park reserves eased to a 4-1 win over Milton reserves and Trafford United reserves were celebrating after their first win of the season by 5-3 in an entertaining game at AFC Oldham reserves.

It was also tight in the other game in the division with Old Stretfordians reserves winning 2-1 against Parrs Wood Celtic.

The game of the day in Division B saw the top two clash in a Trafford derby and Aldermere reserves moved seven points clear at the top with a 3-1 win at Flixton JFC.

There were six hits for Irlam Tigers Rangers by 6-0 at AFC Oldham thirds and Heaton Mersey who enjoyed their first win of the season by 6-3 over Moston Brook thirds.

Just two games were played in Division C, but there was a terrific result for Govan Athletic as they played their first game at their new home at Parrs Wood High School.

Govan were pointless as they hosted leaders Salford Storm but in an amazing game they emerged with a breathless 5-4 victory.

The other game saw Village Manchester reserves hosting Oldham Vics reserves with Village leading 1-0 at the break with a neat finish from Chris Collins.

Both sides had their chances after the break but Village took advantage of theirs with goals from Brian Heywood and Alex Dickinson taking them home by 3-0.

Division D leaders Deans were without a game and IrlamTigers A made the most of it in a 5-3 win over Shaw Athletic reserves to overtake Deans on goal difference.

Urmston Town Vale stay a point behind the top two as they won 3-1 at FC Bury Aces with the same score-line going in favour of Moston Brook fourths at Chadderton Park reserves.

Late entries in to the division Spurley Hey reserves look to become a threat to the leading group as they won 3-2 hosting Rochdale Galaxy.