Despite some horrendous weather, which fortunately came too late to cause many disruptions, this was a superb day for grassroots football with goals galore, some fantastic action and new teams in the league making an early impact in their respective divisions.

This was highlighted in the Premier Division which looks set to be an enthralling contest for the season ahead.

Irlam Tigers set the bar for the new teams in the division as they picked up their first win by 4-2 at Abacus Media.

They were inspired by a terrific solo opener from Jordan Byrne as he ran 60 yards with the ball then turned and clinically chipped the ball over the keeper.

Adding to this were strikes from Ben Christopher (two), and a penalty from Tyler Lee.

South Manchester also picked up their first win with an emphatic 5-1 cruise at Manchester Polonia.

The other two games were high-class thrillers with the honours shared as AFC Oldham drew 3-3 with an impressive Salford Vics and Milton shared eight goals with Dom Doyle in another great advert for the league.

New boys Stretford Paddock won their third successive game to move clear at the top of Division One as they accounted for Signol OB 3-1 in a tight encounter.

Their nearest challengers are the new-look Moston Brook who were comfortable 4-1 victors at Urmston Town JFC.

New team De La Salle are also in the mix with an excellent 5-3 win at high-flying Hadfield Athletic.

Picking up their first wins of the season were Trafford United, who had Rick Hulme, Aiden Bannon and Asad Kazim netting in a comfortable 5-1 win at Didsbury and Bury Ams had to work much harder for an exciting 4-3 win at Dukinfield Athletic.

Old Stretfordians sit proudly at the top of Division Two as they kept up their 100 per cent record with a fine 6-3 win at Rochdalians reserves.

Chadderton Cott notched up their second win, scoring the only goal of their game with Bedians to stay in second spot with a game in hand on the leaders.

Mellor reserves enjoyed a 5-1 win over Salford Vics reserves to stay in touch with the top two but undoubtedly the game of the day saw Oldham Vics win by the odd goal in eleven hosting South Manchester reserves.

It’s looking tight at the top of Division Three with leaders Elton Lib Hargreaves staying three points clear of four other teams after a comfortable 5-2 win over Stretford Paddock reserves.

Hattersley, another new addition to the L&C, look to be a big threat as they kept up their winning streak with a goals-filled 8-4 spectacular over Abacus Media reserves.

Joining them on six points are Sale Ams who flew out of the traps at Wythenshawe Wanderers with early strikes from David Sykes, Shinji Clements and hotshot Danny Harwood taking them through to a 6-1 win.

Aldermere beat Stoconians reserves 4-2 to join them on six points.

Hooley Bridge Celtic were celebrating after posting their first win of the season by 3-1 over Didsbury reserves and Woodhouses and Village Manchester ended locked on 1-1.

AFC Oldham reserves are on top of Division A after a hard-earned 3-2 win at title rivals AFC Stockport and they also have a game in hand over them.

Salford Storm also had to work hard for a 4-3 win over Milton reserves and Wilmslow-based Kartel opened their L&C account with a point in a very rare goalless draw at Old Stretfordians reserves.

In Division B the new Aldermere reserves continued their fine start to the season, posting their third win by 3-1 at Bury Ams reserves.

No problems for Hillgate who also have a 100 per cent record after cruising to a 5-0 win over Dukinfield Athletic reserves.

There was little between the teams in the other three games with Heaton Mersey having David Killilea and Warren Dawkins netting as they shared eight goals with Flixton. 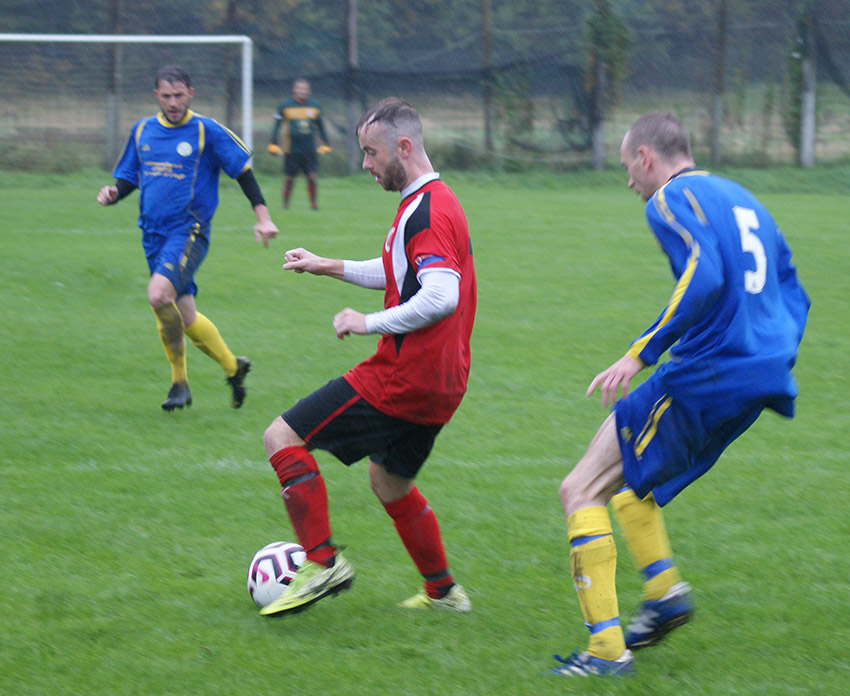 Chadderton Cott reserves drew 1-1 with Irlam Tiger Rangers and Spurley scored the only goal of their game with Moston Brook thirds to stay in joint second spot with Hillgate.

Bury Ams thirds are clear leaders in Division C after running riot in a 5-1 win at Oldham Vics reserves.

There were 3-1 wins for Altrincham Hale against Govan Athletic and Didsbury thirds against Stockport Warriors.

Radclyffe reserves shared six goals with Salford Storm reserves and Stoconians thirds netted the only goal of their game with Village Manchester reserves.

Finally in the new Division D there was a real goalfest with new boys Greater Manchester AFC romping to an 11-0 win over Stoconians fourths and FC Bury Aces enjoying six of the best with a 6-0 win over Chadderton Park reserves.

But Irlam Tiger Rangers stay on top after picking up a gritty point in a 4-4 thriller against Urmston Town Vale.